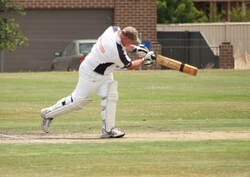 Mick's back as Senior Coach for Ballan for 2018/19
Ballan Cricket Club welcomes back Mick Loughnane to take over the reins, of Senior Coach, from Noel Heafield.
Noel is staying on as our President to continue the good work that he started last season.
Former Coach and President, Mick is keen to take on the role again and try to inject some more professionalism and pride into our senior teams. Mick's qualifications go with out saying, but I will tell some of them.
He has played over 150 games for Ballan since joining us in the 2002/03 season.
He was Senior coach from 2005 to 2010 and became a life member in 2015. Has won many Association awards including; Senior Batting, Catches, Batting Aggregate and runner up in the Bernie Davey medal voting (twice)
Mick has coached our U14 and U16's to premierships and was our 2nd XI Premiership Captain in 2011/12.
One of the best batsmen that has played with Ballan and within the district as well.
His highest score with Ballan is 209 n.o. along with 8 centuries, 2  x 150's & 2 double centuries.
All of these figures are only since his time with Ballan.