The Ballan Cricket Club , in it's current format, was reformed in the early 1970's. There is some speculation that it was changed from the Mt. Wallace CC to Ballan CC .
At that time we played in the Bacchus Marsh Cricket Association up until the end of 1974-5 / 1975-6 season. The team may have laid off for one of those  seasons for reasons unknown.
In September 1975, the BCC decided to move to the Ballarat Cricket Association with the junior side remaining with the BMCA.
The BCC started in 1976 with the BCA .  The committee wanted to start in D grade but I do not know if this eventuated. The committee also considered starting a second side but failed to get numbers. A second XI did get going in the following years and played in E, C & C reserve grades until the late 1980's.
The First XI played in B reserve and then B grade until the end of 1989-90 with some success, winning three grand finals in a row. Two in B reserve and then , after going up  a grade, taking out the B grade Grand final in 1983-84.
Chris Mullane also took out the top award, with the BCA, of "B Grade Best Player" in 1983-4 & 1986-87. This award is the equivalent of the current "Bernie Davey Medal" that is awarded for the best player in Division 1.
Notably, B Grade was the highest grade of hard-wicket competition in the BCA, with only the turf comps of a higher standard. (most times) 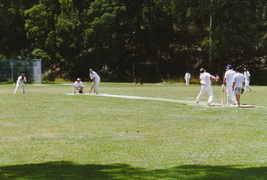 1996 Blackwood. Steven Gates bowling
1990-1 season saw a big change for Ballan with the move out of the BCA into the Daylesford & District Cricket Association. This change was accompanied by a name change to the "Bunding Cricket Club". The name change was due to the circumstances that arose with the shift away from the BCA.
We played under that banner for 3 seasons under the leadership of Steven Gates (President) then changed back to the "Ballan Cricket Club". Our affiliation with the DDCA continued on for a total of 15 seasons with mixed success.  Only one Premiership came our way in 1996-7, with many runners up during that period. Several of our members played  representative  cricket with the DDCA and also took out several DDCA awards at the annual presentation nights including including; the Rick Field Award for Best Player, the Warren Pickering Award for Best Bowling figures. Both Senior & Junior batting and bowling averages & aggregates as well as most catches..
The 2004/05 season saw a mighty partnership, for Ballan A against Smeaton, of 291 runs between Steven Gates ( 203) and Jim Dunne (110). Jim also took  5 stumpings in the same game. Stevens' 203 was the highest individual score recorded for Ballan A at that time following Mick Loughnane 's innings, in 2003/04 for Ballan,  with a huge knock of 209 not out.
The DDCA always had notable guest speakers including, but not only; Merv Hughes, Dean Jones, 'Slug' Jordan, Neville Oliver, Jim Higgs, Max Walker,Ian Redpath , Mick McGuane & others.
The Ballan 2nd XI restarted in 2002-03 in the same competition as our 1st XI which meant Ballan 1 would play Ballan 2 (Who had the home ground advantage?)
We could see that the club was starting to outgrow the DDCA as we had a lot of juniors and seniors wanting to play cricket therefore the club made the decision to move back to the BCA for the 2005-06 season. It was a difficult decision considering the respect & friendships built up with the DDCA and our opponents over the years. This meant that our 2nd XI could play in their own grade , that we could form our junior sides and potentially start another senior team, numbers permitting.

With the move back to the BCA we started with Div 1 &Div 4. Div 4 were Premiers & Champions in 2008-9 and moved up to Div 3.
During this period the "Milo Cricket" program was taken up by the Ballan members to help promote & teach cricket for kids aged between 5 & 8 years, before undertaking the underage competitions. Many of the Ballan junior players have moved up the ranks into senior competition and are now the backbone of those sides, in all divisions.
20011-12 saw the formation of a third side for the first time in the BCC history, so we had teams in Div 1, Div 3 & Div 4.
However we had to drop our 3rd XI the following season due to lack of numbers.
2011-12 saw our Div 3 side take out the Premiership .
2012-13 has  seen the introduction of the Ballan Cricket Club website so that  members, future members, fans & sponsors can see what is happening in and around the club.
The Centurions supporters club has also been introduced to the BCC to bring non playing members ( ex players & supporters alike) together to be recognized as a large and ongoing  part of the club.
2013-14 has seen one of our U14 teams being dropped due to a lack of numbers within that age group however some of the slack has been picked up by our new U12 side playing in the MJCA.
2014/15 saw ground upgrades forcing us to play all of our games away yet again. The pitch was finally put in only weeks before the start of the 2015/16 season. Home games were at Korweinguboora. However being away from our home pitch may have brought some luck with our Division 1 side and our U16's taking out their respective Grand Finals. Our 1st XI ( Div 1) had been waiting for a long time, since 1998 in the Daylesford comp', and had been runners up on many occasions in that time. This had followed a successful T20 series where Ballan came runners up for the second year in a row much to the surprise of the turf comp' sides who didn't really rate us as a chance.
Melton Junior Cricket Association
In a new initiative for the 2013-14 season, the Ballan Cricket Club has entered an U12 side in the MJCA. Their games are played on Friday evenings which gives the Milo Cricket kids a chance to step up and continue playing cricket with Ballan.
This initiative fills a gap between Milo Cricket (5 to 8 year olds) and  the U14 competitions in the BCA and hopefully maintains their interest & enjoyment of the great game of cricket and the Ballan Cricket Club.
(We do need to confirm some of these details so if anyone knows for sure then let Chris know. Also if there is more info out there let me know as well.)